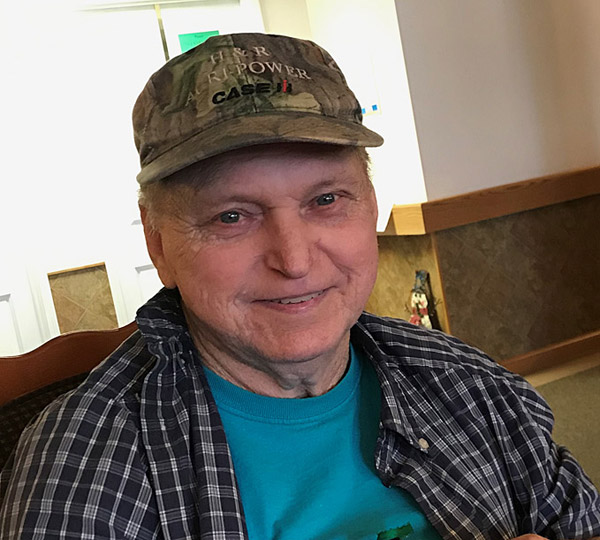 This month’s resident spotlight is Truman Latham. Truman was born and raised in Metropolis; however, he has lived all around Southern Illinois. Truman also spent some time in Chicago where he worked at a steel plant. Truman went to school at Metropolis grade school where he left school after the eighth grade to help his father in his business ventures. Truman is the sixth of fourteen children! His mother stayed at home to help raise him and his siblings. He still has sisters living in the area who come to visit him during the holiday season. Truman reminisced about big family gatherings for the holidays with his brothers and sisters. As the years went by his family still met for the holidays and he now says he has “too many nieces and nephews to count.” Truman was very close with his parents and said, “we didn’t have much, but they always took care of us.”

Truman and his late wife, Brenda, were married for 44 years. When asked how they met, he laughed and said, “My brother’s house!” Brenda was living with Truman’s brother and sister-in-law, who turned out to be Brenda’s sister. The rest is history! Truman went on to say how proud he was of Brenda and how much she loved her kids and grandkids. Together Brenda and Truman had two children, a son and a daughter. From his children he has six grandsons and three great-grandsons. He joked and said “we ran all the women off, I guess.”

In his younger years, Truman enjoyed hunting and fishing. In more recent years, Truman’s favorite hobby has been collecting angels, which is something his wife did for many years. He said, “She had over 100 angels at one point, real pretty ones, and big ones too.” Truman can also be seen attending many activities and crafts at Autumn Ridge. “I never liked to sit still, never did,” he says about his free time.

When he moved to Autumn Ridge Supportive Living, Truman recognized a familiar face in his friend, Ethel, who was his neighbor when he lived in Metropolis. He didn’t know Ethel lived here before he moved; however, it was a pleasant surprise. “I’ve known her for 20 years.” Truman said it was nice to have someone here he already knew. During his time at Autumn Ridge Supportive Living Truman has made many more friends and is known as the resident jokester.

We don’t know what we would do without Truman at Autumn Ridge Supportive Living!