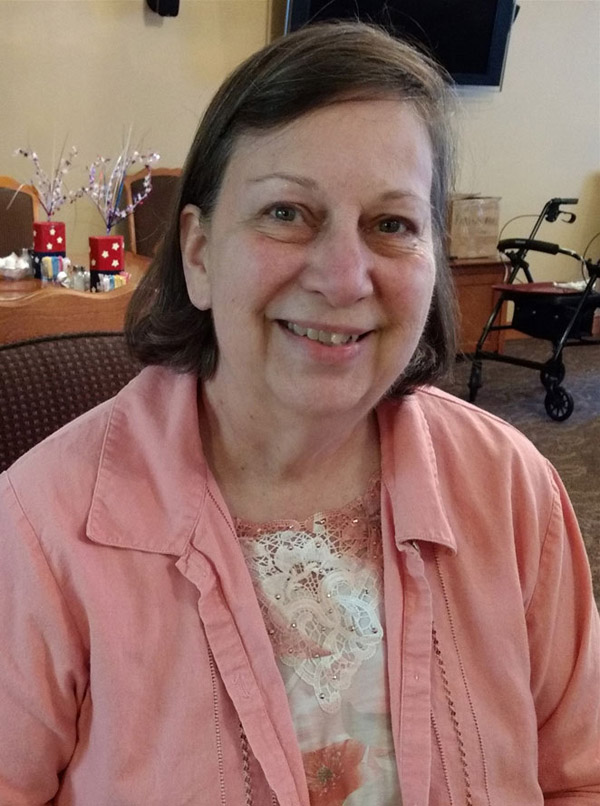 Peggy Watts has lived at Autumn Ridge Supportive Living for almost three years. Most of Peggy’s life she lived in Massac County. Early on her father owned a grocery store in Brookport where she attended school. After her father got out of the grocery business, her parents and grandparents swapped houses. This move then put her family in the rural part of the county causing her to switch from Brookport Grade School to Unity Grade School. The house swap enabled her father to run the family farm. Peggy was the third of four daughters. Peggy shared that her father had a nickname for everyone. She said he wanted a son badly but only had daughters. She laughed when she said he would often call her Tom. She said he would say, “Come on Tom, let’s go check the fields.”

After attending Massac County High School, Peggy then attended Southern Illinois University in Carbondale. She smiled with pride that she worked her way through college by cleaning houses and bartending, and that she was the only one of four who went on to college. She got her degree in education which proved beneficial when she ran a day care for many years for the United Methodist Church in Metropolis. Peggy also worked for her sister and brother-in-law in their pharmacy. During her time there, she became a pharmacy technician. She had to quit when she had a stroke.

Peggy herself had two children, Adam and Tyson, and she has 5 grandchildren. She stated that she and Tyson even shared the same birthday.

One of the many hobbies Peggy had was knitting and she knitted many things. She was also a very avid reader and would read almost any type of book. Antique hunting with her sister Nancy was a favorite pastime to do.

Peggy giggled and her face lit up when she shared that she was a “hippie”. She stated, “bellbottoms, love and peace, and flowers, the whole deal.” Peggy and some friends even hitchhiked their way to California at one point sleeping in sleeping bags along the way.

Peggy is another ray of sunshine in our Autumn Ridge Supportive Living family.