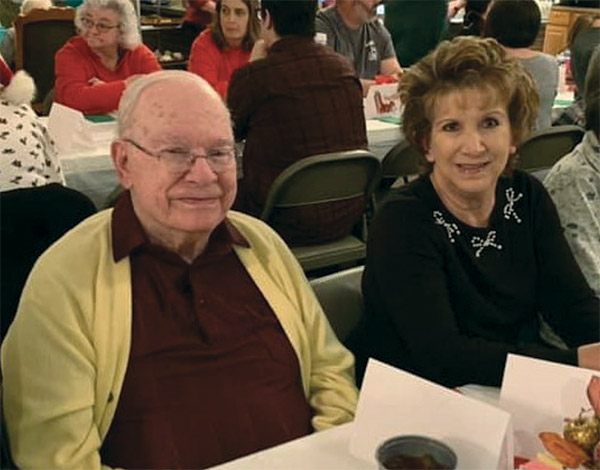 Bill Worrell was born and raised in Vienna and has been a resident of Autumn Ridge Supportive Living for nearly five years. Bill spoke of his family life growing up. He said his parents were both teachers in Southern Illinois and his father even taught his mother in school. He reminisced about a very special teacher of his as he was growing up, one that left an impact in his life to this day for her kind and caring attitude she always displayed in the classroom. Her name was Lizzie Gillespie, who he later named his beloved dog, Lizzie after.

When we discussed his family life and his relationship with his late wife, Bill lit up. He spoke of Nan fondly and said they met during their time at U of I. He was in a fraternity and she was in a sorority. They met at a party one night and hit it off. They were married for 66 years and had two sons and one daughter. When speaking of his daughter, Bill said, “I adore her. I love the boys, but she’s special.” Bill is very proud of his family and has remained very close with his children despite them living so far away.

He and his wife enjoyed traveling together. They would often take trips to the ocean. You could call Bill a world traveler of sorts. He and Nan have spent time in Italy, Scotland, Germany, Australia, Wales, Alaska, and Canada. In 1946, Bill was drafted onto the army and was sent to Tokyo, Japan. His experience there was very eye opening, “I went over there with a chip on my shoulder, but the Japanese people embraced me. It was not what I expected.” After the army, he went to the University of Illinois and graduated with his Bachelor’s Degree in in Political Science.

Bill moved away from the area for a brief period of time to Freeport, Illinois where he worked for an insurance company. He returned home, when his father’s health declined, to help his mother with the family insurance agency. After his time in insurance, he was appointed the Superintendent of the Department of Public Aid in Johnson County—a position which he held for 31 years. When he retired, he learned to frame pictures, and enjoyed that for 21 years. He became known for his work with framing and people would seek him out for his work. “I loved it.”

Bill has lived a fulfilling life with many great adventures. He was even on the founding Board of Family Counseling Center, Inc. (now Arrowleaf), which owns and operates Autumn Ridge Supportive Living. A fun fact that you might not know about Bill is that he likes to collect ceramic pigs. When asked about his time at Autumn Ridge Supportive Living, Bill said, “I love it here. I love the workers and people. I feel so blessed.”