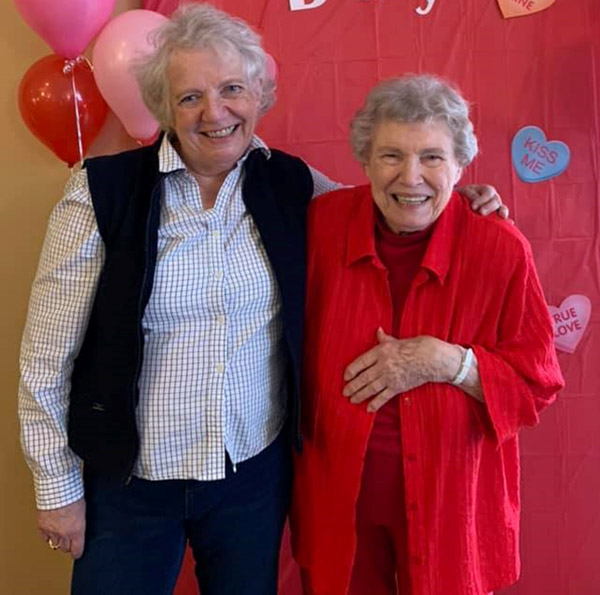 Shirley Wolfe has been a resident of Autumn Ridge Supportive Living for over a year, but she is a long time fixture of Southern Illinois. Shirley was born in Reevesville, but her father’s ministerial career brought her and her family to Brookport, Cypress, Karnak, and other small towns in the area. She graduated from Vienna High school and considers Vienna to be her home. Shirley grew up with her older sister who she remains very close with today. Although Shirley’s sister lives in Canada, they are able to talk on the phone and write letters frequently. Shirley believes the practice of writing letters is a lost art, and she is passionate about it.

As we spoke, Shirley told me she was looking through old letters that her and her husband, Ted, wrote to each other when he was in the service. She enjoys reading those letters and reminiscing about those times with him. Shirley first met Ted when she was a child, although they did not get together until much later when he came home on leave to visit family for Thanksgiving. “Naturally I dressed to impress when I heard he was coming into town!” After Shirley and Ted reunited, they fell for each other. When Ted returned home from the service, they got married. She was 18 and he was 24. Shirley’s face lit up and she beamed as she spoke about Ted and the loving relationship they had.

Shirley studied medical records technology and worked in several hospitals in the area. She has always liked to keep busy and enjoyed her work. However, she says her most important job was raising her children. Shirley’s greatest accomplishments are her three daughters, five grandchildren, and five great grandchildren. Family is very important to her and she shared many stories of past family gatherings.

Shirley laughed as she spoke of a Halloween party that she, her sister, and cousin attended. They went as a “shotgun wedding party” complete with a double-barrel shotgun. For the entire party they went unrecognized and ended up winning first place in a costume contest. This memory came to her as she was looking through old letters she had written to her husband before they got married.

Shirley enjoys assembling and looking at her old photo albums. Some words of advice she gave was to “Always label the back of your pictures! It’s so important to remember who everyone is and what they were doing.” Shirley has written an autobiography for the younger generations in her family to get to know her. “I think it’s so important for future generations.” She is very involved in genealogy and is a member of the historical society. She went on to tell stories of her and her sister traveling the country to learn about their ancestors. “My sister and I fell in love with genealogy; it’s addictive.”

Shirley loves to stay active in the community and has several friends who come to see her on a regular basis. She has enjoyed her time at Autumn Ridge Supportive Living and loves the home-like atmosphere and getting to know everyone.